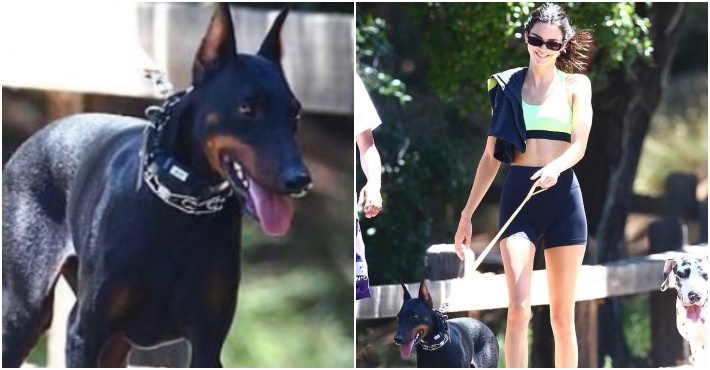 I never thought I would be writing about celebrity Kendall Jenner, but here I am.

Kendall owns a Doberman named Pyro, (cool name by the way). And she received some online hate recently after she was seen walking her Doberman with a prong collar. Some people commented that prong collars are inhumane. While others came to her defense and commented that they are legit training collars used by professional dog trainers.

Dobermans seem to generate lots of controversy. From ear cropping to tail docking, to whether or not they are an aggressive breed. And now the controversy is the use of prong collars on Dobermans.

Are prong collars harmful to dogs?

What are prong collars?

It’s unclear who originally invented PRONG COLLARS. Animal collars with spikes go way back to the Roman era. But the prong collar as we know it today was created by Herm Sprenger from Germany. He patented prong collar for dogs and it’s a popular brand name today. Sometimes prong collars are also called “pinch collars”.

Prong collars have metal links that fit together by connecting through blunt prongs that point inward toward the dog’s neck. They also have a section of chain similar to the Martingale collar that limits how tightly the collar can close.   When the prongs tighten, they apply pressure evenly around the neck. Some people think that this action simulates the correctional nip a mother gives her pups.

Wikipedia explains that the leash attaches to this chain section. There are two options on the prong collar for leash attachment, the dead ring, and the live ring. The live ring is used when a dog needs more correction as it gives more slack when the leash is popped. The dead ring is used most commonly when first training a dog to use a prong. The leash is attached to both rings and as such, there is not as much slack as when attached to the live ring. The limited traction of the martingale chain combined with the angle of the prongs prevents the prongs from moving close enough to pinch. The collar is designed to prevent the dog from pulling by applying pressure evenly around the dog’s neck.

Yes, they look scary and medieval, but is the use of a prong collar inhumane? Keep reading.

Unlike flat, martingale, or choke collars the prong collar protects the trachea since it distributes pressure evenly around the prongs. This is why some believe it’s a safe and humane training tool. This demonstration shows pressure testing of the prong collar on a balloon.

So how safe are prong collars?

The sizing and placement of the prong collar are important factors when using them. Also, the prong size needs to be appropriate to the dog’s size and sensitivity. They need to be placed high on the dog’s neck, just behind the ears. Any extra links should be removed so that it’s snug, not drooping. Worn correctly the sensitive throat area is protected and the pressure is evenly distributed.

And like any other type of collar, it can break open, especially if the links get old and worn out. This is why it’s advised to use a secondary method of attachment or control, such as a regular flat collar.

Unfortunately, some people use prong collars incorrectly. Whether they buy the wrong size, place it too low on the dog’s neck, or use more force than is necessary for corrections. Also, prong collars are only meant to be used for training purposes, they are not to be left on the dog all day. Injuries can and do happen when used incorrectly, including puncture wounds and bruising. And there have also been cases of animal abuse where it’s suspected the blunt metal prongs had been sharpened. Or another case where the prong collar was left on a dog all the time, which resulted in serious injuries. Yes, prong collars have the potential for injuring a dog, but so do any other collar styles, especially the choke chain. Another concern is that some dogs are allergic to the metal material. In these cases, the owner can buy rubber tips for the prong ends.

There are some people who insist that the use of punishment or negative feedback training causes behaviour issues. Furthermore, people who are poor dog trainers can confuse their dogs, which can stress their dogs or cause aggression. Dogs who are already known to be aggressive should not be trained with prongs because of the risk of further increasing their aggression. With these dogs, you want to seek out trainers who have experience training difficult dogs.

Some cities have banned prong collars, so you’ll need to check your local bylaws. It varies widely and some places that had a ban on prong collars may have repealed the ban. This happened in Toronto, Canada. A ban was imposed and then repealed because concern was expressed over the lack of consultation with affected organizations who use prong collars. Meaningful consultation should happen with other groups concerned including vets, professional dog trainers, dog groomers, dog behavior experts, rescue groups, and groups who use service dogs, like the National Institute for the Blind.

Are there alternatives to prong collar use?

Prong Collars vs Choke Chains vs Head Halters vs Harnesses

Unfortunately, some Dobermans are more challenging to walk. I have tried head halters and harness styles with varying degrees of success and control. Head halters (similar to horse halters) are no longer recommended since they are uncomfortable for dogs and usually cause irritation on the nose. They also sometimes slide up into the eyes. And if the leash/nose is jerked forcibly to one side it may cause injury to the dog’s neck. The harness style appears to give the owner more control but strong dogs tend to push more now that they can use their whole body and chest. And lastly, choke chain collars are also not recommended because the unlimited constriction can choke the dog.

My favorite collar is still the Martingale collar (also known as the half choke collar). This type of collar is great for Dobermans since they have narrow heads which can slip out of regular collars. Also, they are adjustable and still allow for safe and humane training. This collar allows for training corrections by doing leash “pops” but they will not restrict breathing. Remember a leash correction is a leash “pop”, not a leash pull. Dog owners need to remember this important training skill.

My Last Words on the Prong Use Debate

Prong collars are neither good nor bad. They are a tool. And like most tools, if they’re used correctly they serve a valuable purpose. I think the key to this topic is the proper instruction and education of the public. When used correctly by good trainers, they have their place. We need to look at facts instead of feelings, and not make decisions based solely on emotion. For some dominant or large dogs, these collars are a necessary training tool. If a dog owner can’t control and enjoy their dog walks, it might mean they stop taking their dog outside or abandon them to a shelter. Without this tool, some dogs might be left at home, not getting enough exercise or time experiencing the outdoors. A dog left isolated is inhumane. We need to give owners of challenging dogs options instead of stigmatizing or shaming them. Also, no one who chooses to use prong collars correctly, should be harassed in public. And if you’re worried about being seen in public with a prong collar on your dog, it might be a good idea to get a prong collar cover.

Most of the time it’s pointless to debate emotional people, avoid confrontation when you can.

What do you think? Have you experienced training with prong collars? Tell us in the comments below.