Where do Doberman Pinschers come from?

Although the exact origins of the Doberman breed cannot be verified, it’s believed that this popular breed was created in Germany in the early 1880s.

In the town of Apolda, in the state of Thuringia, lived Karl Friedrich Louis Dobermann.  He is credited with developing the Doberman and is who the Doberman breed is named after. Herr Doberman was born in 1834 and died in 1894, at which time the Germans named the breed, Doberman Pinscher in his honor. The Doberman was also known at the time as “Thuringian pinschers”, “Dobermann’s Hunde” or Dobermann’s dogs, and “Soldatenhunds” or soldier dogs. The pinscher was later dropped in 1949 as it was not a suitable descriptor for the breed. (Note that the miniature pinscher is not a “mini” Doberman and is not related.) Also, the second “n” in Dobermann has been dropped in most parts of the world.

Louis Dobermann worked as the local tax and rent collector, a policeman, night watchman, dogcatcher, and caretaker of the town’s dog pound. He was inspired to create a new breed of guard dog that would serve to protect him while doing his various work duties. He aimed to create a guard dog that was courageous with a protective instinct, intelligent, with a strong mouth and a good nose. Unfortunately for us, at the time he didn’t realize that his breeding experiments would be significant and that he was creating one of the most popular dogs breeds in the world. As a result, we lack detailed records of his breeding work in creating the Doberman security dog.

If you are ever in Europe you may want to visit Louis Dobermann’s home town of Apolda (Thuringia, Germany). A bronze statue was created in his honor, depicting a Doberman family. The monument was made by sculptor Kerstin Stöckel in 1999. 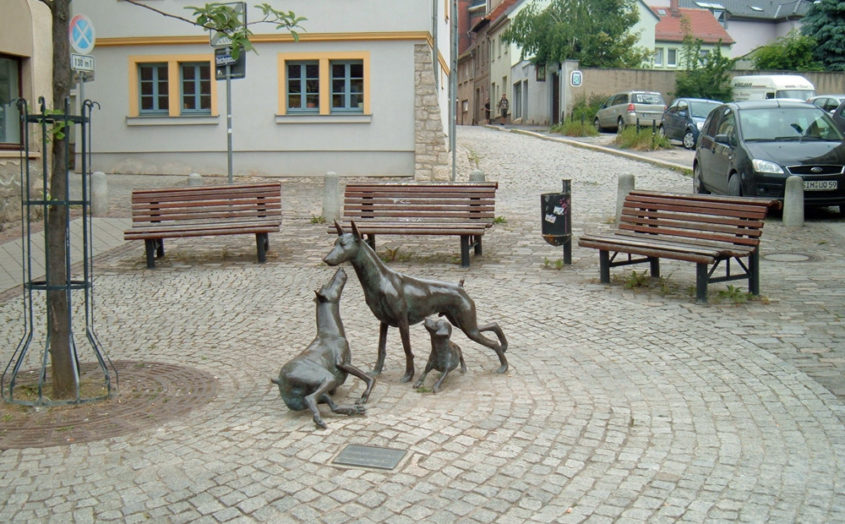 What breeds make a Doberman Pinscher?

Although there is some disagreement over the Doberman’s background, the following dogs are thought to have contributed to the breed: Note that the early Dobermans look different from today’s current standard. Whereas the Doberman was originally bred for protection, today it is bred for a more even-tempered nature. People nowadays usually own Dobermans for their companionship instead of their protection or working abilities.

After Herr Dobermann’s death, breeders Goswin Tischler and Otto Goeller further refined the Doberman dog. The standard for the breed was written and approved in 1890 by the German Kennel Club. Otto Goeller also founded the National Dobermann Pinscher Club in 1899.

The Doberman Pinscher Club of America was created in 1921. If you’d like to read more about the history of the breed, here is a link to the online book “History & Development of the Breed” by Philipp Gruenig from 1939. It shows the evolution of the breed and has lots of photos of what the original Doberman used to look like before it was refined into our present-day standard.

What does Doberman mean?

The Doberman name obviously comes from the creator and tax collector Karl Friedrich Louis Dobermann of Germany. Furthermore, the family surname originated in Pomerania, a historical region around Poland and Germany. In Middle High German and Slovenian, the word “dobr” means “good.”

So now you know that it’s a fact that the Doberman is a “good” dog.

3 thoughts on “Who Created The Doberman Pinscher?”