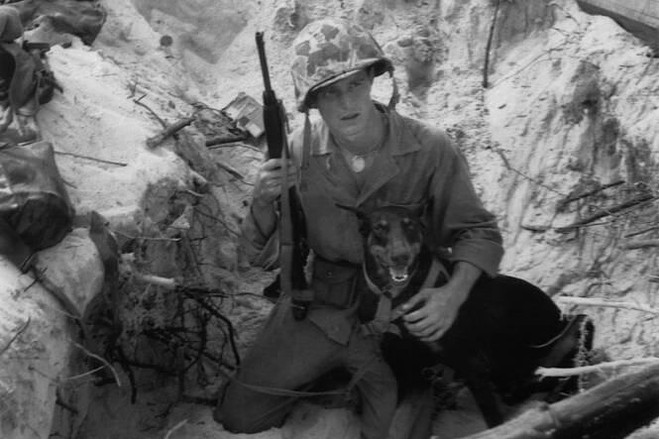 One of the more interesting aspects of Doberman history was the use of this breed during war times. Usually, we think of German Shepherds as the military service dog, but the Doberman was also used.  This shouldn’t surprise us since our breed is known to be smart, tough, and loyal.  Dobermans are known for their protective guarding abilities. And because of their intelligence and easy trainability, they were found useful for service in the military.

Dobermans were used in both WWI and WWII assisting soldiers. These war dogs performed various duties. They were trained to find and rescue wounded soldiers, detect enemy locations and mines, act as messengers, sentries, and guard dogs. Unfortunately, there is also mention that dogs were used in the war as “suicide dogs”.  These dogs were packed with explosives that were remotely detonated once the dog was near an enemy tank.  It’s unclear if Dobermans were used for this tactic. But I doubt it was a common practice since trained dogs were a valuable resource.  But it definitely shows the cruelty, wastefulness, and sadness of war.

In WWII, the U.S. Marine Corps had their own K-9 Corps known as the “Devil’s Dogs”,  although not the most flattering name for a heroic group of dogs. These dogs received specialized training. The messenger dogs delivered messages, ammunition, or medical supplies. The sentry dogs were trained to alert handlers of any enemy strangers approaching. These dogs prevented many ambushes as they stood watch protecting their sleeping, tired soldier handlers.

In honor of these dogs, a memorial was created on the island of Guam in the South Pacific. Fourteen dogs were killed in action and others died from exhaustion, tropical illness, heat stroke, accidents, and anemia from hookworm. All were buried in Guam in what is now the first war dog memorial. The memorial was created by former 1st Lt. William W. Putney, who was the veterinarian for the dogs on Guam. A beautiful life-size bronze statue, “Always Faithful” was created by artist, Susan Bahary.

A documentary video was also made in 2009 named “War Dogs of the Pacific“.   It tells the story of the Marine dogs in WWII.

Here we see a letter of commendation for one Doberman’s “outstanding performance of duty in combat”. Read more about the Marine Dog Platoon, the Marine Corp Dogs and archived war records. The archives preserve their military service applications, performance and even mention the issue of dog PTSD or “battle fatigue”.