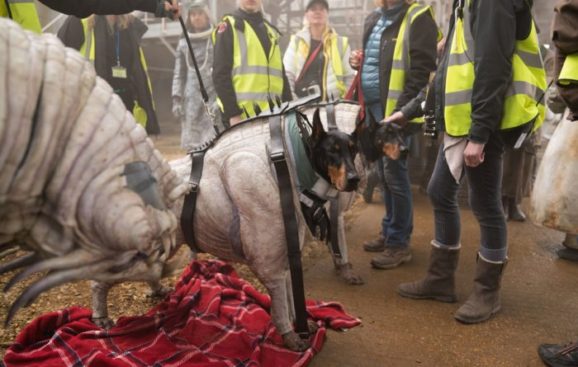 (FYI, There are no spoilers here, it’s safe to keep reading)

Solo: A Star Wars Story is one of the newer movies of the Star Wars franchise, it was released May 2018.  It tells us the backstory of the young Han Solo (Alden Ehrenreich) and his adventures with Chewbacca and Lando (Donald Glover).  Alden did a fantastic job playing the classic Han Solo character. He had tough shoes to fill and I think he pulled it off.

Early on, two large, dog-like creatures are seen in a Star Wars chase scene.  The menacing beasts are chasing after Han Solo and Qi”Ra (Emilia Clarke).  These canine creatures are known in the Star Wars universe as Corellian Hounds. They have a keen sense of smell and are bred for hunting and attack.  It’s the first time we’re seeing these new Star Wars pets.

The Star Wars hound concept started out as sketches and took over six months to create. The aim was to create something that looked like a cross between a dog and an alien species. The bodysuits were created with foam latex to sculpt muscular bodies.

The dogs were trained for months to get used to wearing the alien hound costume. They were designed to be comfortable for the dogs to wear and move around in. They also had a wide field of vision and lots of breathing room. The dogs were so good at their job that they would willingly walk up to the creature head section to place their heads inside. Ready and eager for the next take.

Rumor has it that these dogs were treated like royalty on set. An extra who worked on the movie stated that the dogs were very well taken care of during the filming. The crew would do one take, then get the dogs partially out of costume, give them water, and 15 minutes of rest.  Then move on to another filming session.

If you watch the hounds running in the movie, Doberman owners may recognize the familiar Doberman trot or gallop. Below you can watch the extended foot chase scene that was eventually shortened in the final movie cut.

These dogs with jobs are so impressive. I hope all the dog actors were paid well in treats and belly rubs.