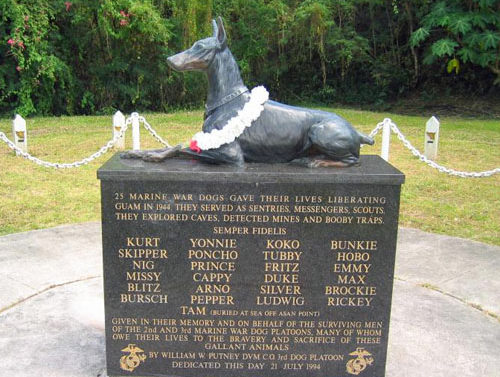 Do you know the Doberman has a war memorial?

Many people aren’t aware that Doberman Pinschers were used in the war.  They were in fact used in World War I and World War 2.  The National War Dog Cemetery was created to honor those dogs who were killed in the 1944 battle of Guam. The 2nd and 3rd Dog Platoon (The Devil Dogs) assisted the marines and were mostly Dobermans. 60 Marine war dogs went to Guam and 25 died and were buried there. Thanks to William Putney, the commanding officer of the Dog Platoon this memorial was created. He saw that the original burial plots of the dogs were forgotten and overgrown with foliage and that their memory deserved respect.

The wars dogs were trained to perform various duties. Messenger dogs were taught to carry messages, ammunition, or medical supplies. The scout dogs were trained to warn the marines of approaching enemies without barking. Others detected land mines, explored caves, or watched over the sleeping marines.

Cappy, the Doberman is credited with saving the lives of 250 marines. By using his sense of smell he detected and warned of the Japanese enemy soldiers coming. Unfortunately, Cappy and his handler, PFC Allen Jacobson were injured by a grenade. It’s said that his handler refused medical treatment until his dog was first evacuated.

The memorial sculpture is titled “Always Faithful”, in reference to the Marine Corps’ own motto, Semper Fidelis. The bronze statue was sponsored by the United Doberman Club and created by sculptor Susan Bahary in 1994, for the 50th anniversary of the liberation of the island of Guam. The 25 war dogs have their names engraved on the monument.  Their service and sacrifice make the Doberman breed even more special to us. For more on the Doberman pinscher soldier with historic pictures.

The Doberman Marine was so respected that an action figure was even made. A boxed G.I. Joe with a Doberman Dog is available. There are 2 editions, the “Jungle Tunnel Rat” and the “U.S. Marine Dog Unit”. 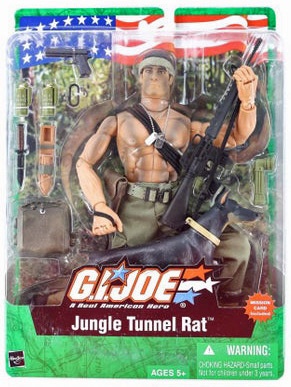