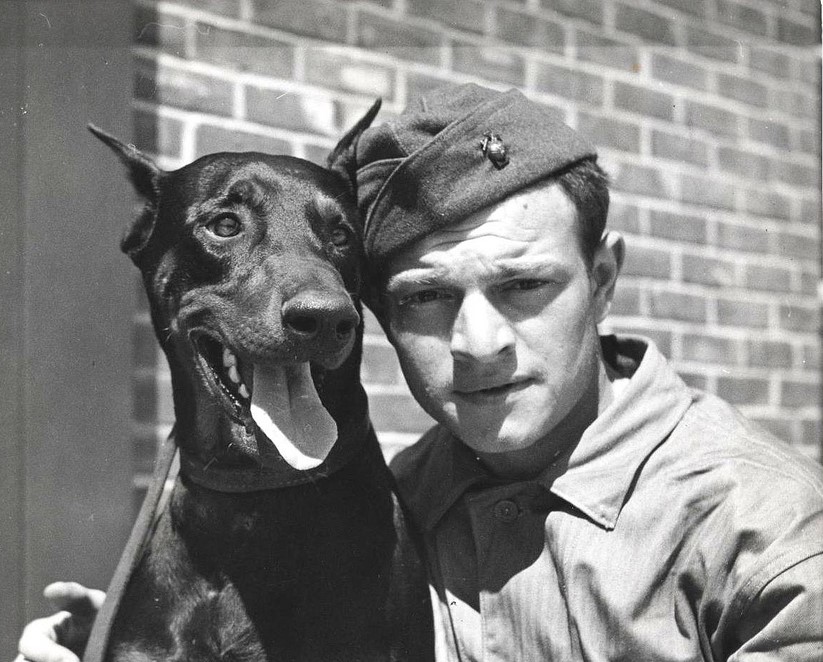 It’s 1942, somewhere in the Pacific: Deadly ambushes by entrenched Japanese in the thick jungles take a heavy toll on American troops.  Marine commanders were willing to try anything, including using dogs to sniff out the hidden enemy.  But even with their superior senses, nobody anticipated just how effective they would be.

“War Dogs of the Pacific,” is a one-hour documentary made in 2009 and directed by Harris Done. This documentary tells us about the Marine Dog Platoons of World War II. These military dogs and handlers performed dangerous missions, but their success at finding the hidden enemy saved countless soldier lives in the Pacific.  They are sometimes forgotten in history recollections, but they deserve their own special place in history.  We thank Harris Done for honoring these dogs in his movie and thus allowing future generations to appreciate our dog companions even more.

Read more about the Doberman in war, with many historical war photos of soldiers with their dogs.

Be prepared,  this movie is certain to make anyone a bit teary-eyed. Here are some reviews from the War Dogs documentary movie:

I happened to see “War Dogs of the Pacific” last night on the Military Channel, and I was moved beyond words.  I was completely unaware of this particular chapter in military history.

The illustration of the human-canine bond is poignant and heart warming. I’ve watched it twice and cried both times.

Being a Doberman breeder and being very passionate about the breed and it’s working traits, I was Excited to see this project finally finished. It was worth the wait and the dogs and handlers that many people never knew about will finally have their story told.

… it is both poignant and uplifting at the same time.  These dogs were Marines and were treated as such – this is a 5 tissue film – a must for WWII buffs and dog owners alike.