It looks like Emperor Palpatine, Darth Vader, and his evil Galactic Empire are now enlisting Dobermans as Stormtrooper soldiers.  Dobermans were used in previous wars here on earth, so it’s not surprising the evil forces would find our Dobermans useful in war again.

While I’m not a big fan of dogs wearing costumes, they can be fun if done safely and for a short time. Costumes may even help our Dobermans get a better reputation.  And the geek in me loves Star Wars. 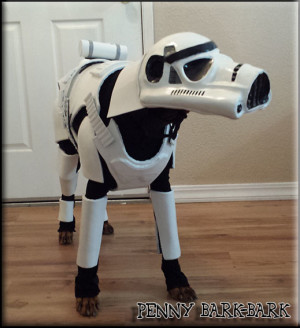 I also like the idea of Star Wars fans coming together for the purpose of doing charity work. The 501st Legion is one international group that enjoys the Star Wars culture while doing fundraising and volunteer charity work. If you’re interested in joining this costume club know that the 501st Legion is the bad guys. The Rebel Legion has the good guys. And the Mandalorian Mercs has the bounty hunters.

The canine Stormtrooper, Penny Bark-Bark, is a 4-year-old Doberman, owned by Sabrina of California.  She made the Doberman star wars costume out of craft foam to make it light and comfortable for her dog to wear. You can see how she made the costume and the stormtrooper helmet here. Sabrina is very talented, she’s also made a Ghostbusters and Iron-Man costume for Penny. Here are some other Star Wars Doberman costumes.

What do you think? Do you like to dress up your Doberman?