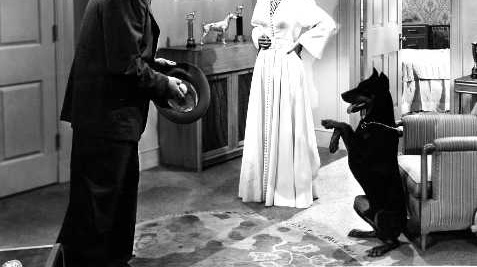 Do you know which movie was the first to star a Doberman?

Most Doberman owners are familiar with the movie, “The Doberman Gang” from 1972.  It’s a classic and fun movie featuring Dobermans who are trained to rob a bank.  But the Doberman actually appeared in a much earlier movie.

In 1946, the movie, “It Shouldn’t Happen To A Dog” was made. World War 2 had ended, and soldiers and war dogs returned home.  With human and canine vets back, Hollywood created the first movie featuring the Doberman. Maybe it was to profit from the breed’s popularity or status as a war-dog hero.

The plot of the movie:

After returning from World War II, a journalist is assigned by his newspaper to be a science editor, but he wants his old job as a crime reporter. While in a bar, he sees what he believes to be a robbery by a beautiful woman and her Doberman partner. He starts a police manhunt after calling in the story to his news desk, before realizing that the woman is innocent and actually a police detective. He also ends up stealing her Doberman. Eventually, they end up working together to catch the Valentine criminal gang.

The movie plot and dialogue are silly, but the film is watchable because of Rodney the Doberman, who steals every scene. He is adorable and portrays the Doberman breed as an intelligent, loyal, and lovable dog.  He does the begging pose perfectly, has cute sneezes, and has an amusing talk with a cab driver.  And thanks to Rodney, in the end, the crooks are caught.

If you enjoy old crime comedy movies you might enjoy this movie. But the real reason to watch it is to see Rodney.  He is the real star.  Besides, it’s only 70 minutes long and gives us an interesting glimpse into life in 1946.

Here’s a link where you can watch the full movie. Tell us what you think of it.

It Shouldn’t Happen To A Dog Movie 2 thoughts on “The First Doberman In Hollywood”