Created in 1877, the Westminster Dog Show is the oldest purebred dog show.  Their mission is “to celebrate the companionship of dogs while promoting responsible dog ownership, health, and breed preservation.” The dogs are evaluated against their breed standard by expert judges.

The dog must be registered with the American Kennel Club and recognized as a Champion dog. Only 2500 dogs are allowed in and breed judging takes place over 3 days.

On an interesting note, in 2014 a new competition was added, the “All American Dog” Agility Championship. This competition is open to mix-breed dogs. 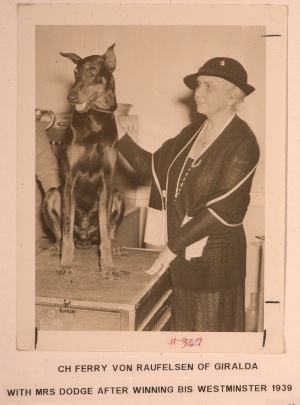 The Doberman has won the Westminster Best In Show four times.

In 2010, the Westminster Dog Show attracted  PETA, the controversial animal rights group. They protested outside the event holding signs that read “Breeders Kill Shelter Dogs Chances”. PETA protestors actually made it onto the show ring, rudely interrupting the best in show round.  Included in the best in show last year was Doberman, Ch Allure “Blazing Star” Alisaton.  While I am a supporter of people adopting dogs from shelters, rescues, and avoiding puppy mills and backyard breeders, criticizing this international event is not effective. Peta should make better use of their resources and instead of using this event to gain publicity, they should be protesting BYB, not this dog show. The Westminster Dog Show is a celebration of all the wonderful breeds that are much loved and cared for by their owners.

So how did our favorite breed, the Doberman do this year? Best of Breed went to GCH Protocol’s Veni Vidi Vici or “Fifi”, owned by Jocelyn & Kevin Mullins. Judging was done by Dr. Robert Smith. Best of the Working Group went to a Portuguese Water Dog named GCH Aviators Luck Be A Lady “Ladybug”.  Best In Show went to a Scottish Deerhound named GCH Foxcliffe “Hickory” Wind.

How do you feel about the Westminster Dog Show and Peta’s protest?